I wish you all Merry Christmas with “Kallikantzaroi“!

I wrote “Kallikantzaroi” back in 2005. I was planning to compose something new for this Christmas but since this is still uncertain let’s stay with something from the past. “Kallikantzaroi” was first written for piano and then I thought that it would be nice to orchestrate it. Here is the orchestrate version: 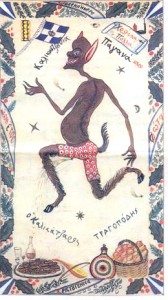 From Wikipedia: Kallikantzaroi is a malevolent goblin in Greek folk tradition. They dwell underground but come to the surface during the twelve days of Christmas, from 25 December to 6 January (from the winter solstice for a fortnight during which time the sun ceases its seasonal movement).

It is believed that Kallikantzaroi stay underground sawing the World tree, so that it will collapse, along with Earth.