Black Hole is a data-driven light and sound sculpture inspired by the geometry of a black hole. In the center of the sculpture, there is a speaker surrounded by luminous bent circular plastic sheets.  Behind the speaker, there is a black cone with a white light at the end.  The accretion disk, the event horizon and the singularity are the fundamental structural elements of this sculpture.

Data from cosmic gravitational waves (from LIGO experiment) has been converted to sound and light for feeding the black hole’s speaker and illuminating the accretion disk.

The sculpture is inspired by the philosophical aspect of Einstein’s general relativity theory and the black holes. The bending of space and time is reflected in the form of the sculpture. The terrifying boundaries of the event horizon, the point of no return, and the unbearable confinement of singularity are marked on the sculpture using an intangible medium, the light. Sound is translating the distant waves of cosmos, the gravitational waves, into our human detected domain, giving us the opportunity to sense the presence of the black hole in our space. 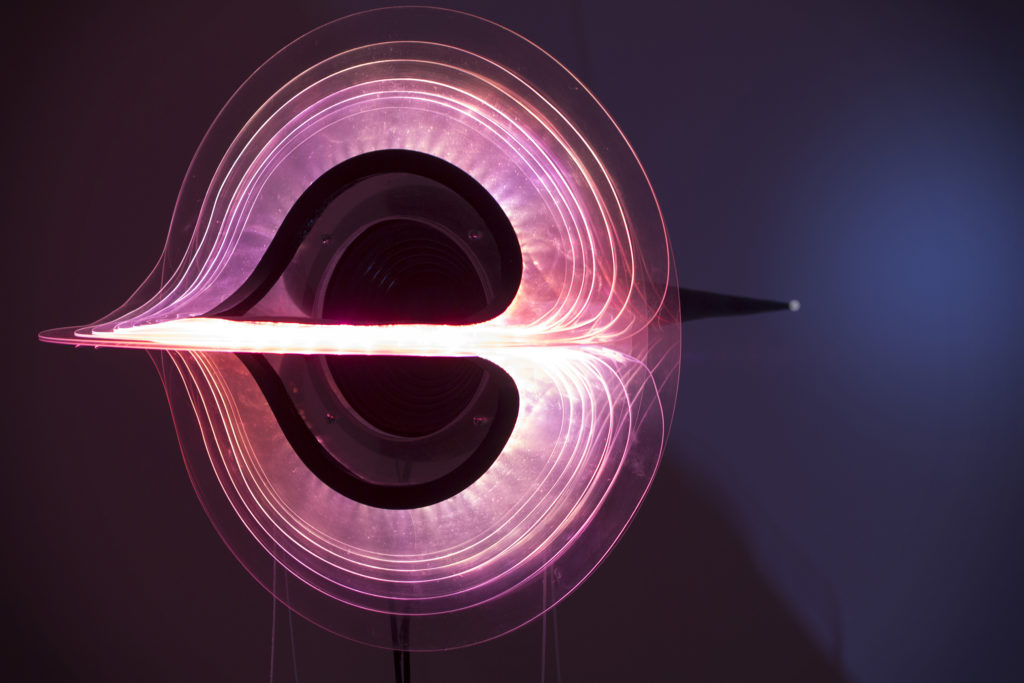 The data were first normalized from  -1.0 to +1.0 and then converted to 16KHz mono audio. Frequencies around 500Hz were removed because these are harmonics of the interferometer’s mirror suspension that resonances at ~500 Hz and are not relevant to the detection or analysis of the data. Then the whole audio was shifted down in pitch for matching the speaker’s frequency response.

Audio result of the sonification process of LIGO experiment data from September 14 2015, 09:16:37 UTC